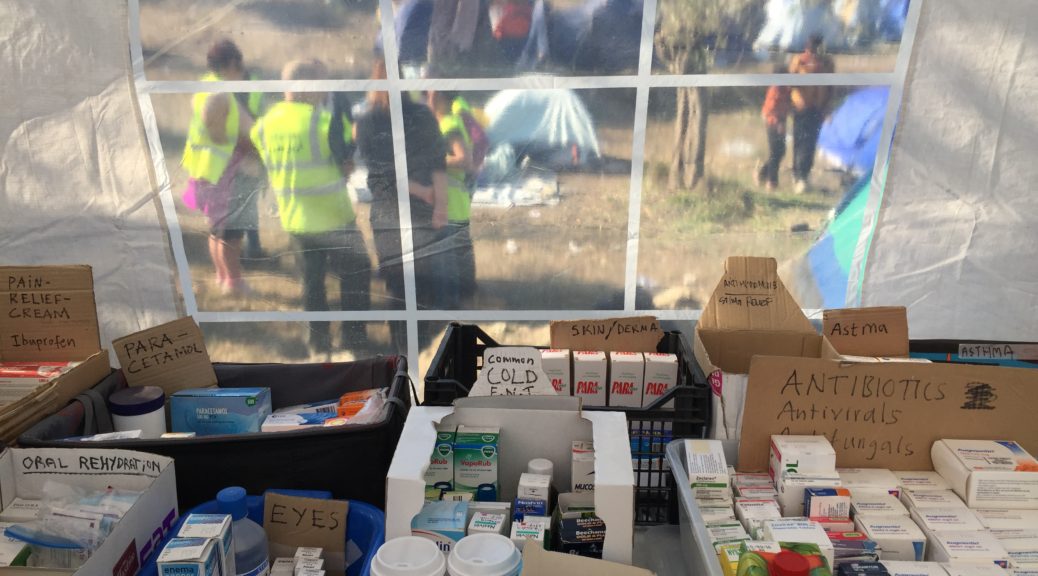 A typical day in November 2015 on Lesvos, Greece:

09:00 It is olive harvesting season and I  liberate my car from under a huge net meant to catch the olives from the trees on the parking space. I share a house just outside Molyvos on the north coast of Lesvos with two other volunteers, respiratory therapists from the United States, who mainly work on the North Coast.

09:10 On my way to Moria Camp I pass an interimistic  camp. 50 people, who had arrived by boats during the night waited for busses to transport them to the transit camps.

10:00 I arrive at Moria Camp.  Colleagues are already at work examining patients, who queue outside the tent. Many patients do not speak English. That seems to be the main issue right now. I then began the day by walking around the hill looking for translators: Farsi-English was the no. 1 need as the Arab-speaking Syrians were registered, and thus left for mainland Greece sooner than the other nationalities.

10:30 I had succeeded finding three volunteer translators, all waiting to be registered them selves: A 21-yr old woman from Afghanistan, a 20-year old man, also from Afghanistan and another 20-yr man from Iran. Female translators were in particularly high demand, for cultural reasons.

11:00 I start to see patients. Most have minor illnesses, mainly  common cold and many ask for antibiotics. Tooth problems are another major issue, for which we as doctors can do little but dispense painkillers. Our pharmacy was remarkably well supplied as several volunteers had brought medicines with them. Furthermore, complete strangers would come by and donate medicines while others would buy medicines according to a list made by some of my colleagues at the local pharmacy.

12:00 A 20-year old Afghan male arrived with severely burned fingers, which he explained happened when lighting a campfire in Turkey. Luckily our extraordinarily well-stocked pharmacy had the items needed to treat him.

12:30 Out of the blue, two dentists arrived with their equipment. They installed themselves on a plastic table right outside our tent and started working.  This first day they performed five tooth extractions.

14:00 A young man, paralyzed from the lower neck and down arrived in a wheelchair pushed by his brother. The young man had been paralyzed for 11 years after he broke his neck falling down from a rock. The told me they had made the long journey from Afghanistan hoping his brother could be cured in Germany.

16:00 I left Moria and drove up to the North Coast. It was a quiet afternoon and I chatted with volunteers from some of the other groups.

19:00 A big boat with more than 200 migrants arrived at the harbor of a small fishing village as I drove by on my way home. I went out to have a look, but all seemed fine.